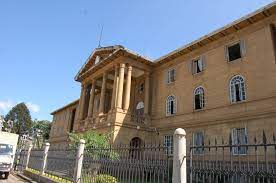 The High Court has thrown out a petition seeking the suspension of the operationalization of the Political Parties Amendment Act 2022.

The three-judge bench consisting of Hedwig Ongudi, Esther Maina and Daniel Ogembo found that it was not unconstitutional.

They further found that there was an elaborate public participation that led to the amendment of the Act.

They stated that participation started way back in 2017 and took almost four years.

They also pointed out that stakeholders were involved in the various forums which members of the Civil Society attended, and Secretary Generals of all political parties.