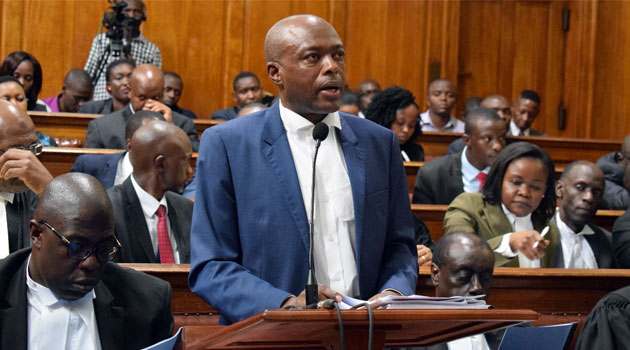 The Office of the Attorney General insists that the President cannot be sued in his personal capacity while still in office. Lawyer Karori Kamau appearing on behalf of the State Law Office told the Supreme Court the Constitution is explicit on the protection accorded to the President from criminal or civil proceedings.

“If there is an effective remedy in the Constitution to deal with situations where the President strays out of the Constitution what is the reason for wanting to name him personally, what is the purpose that would be served in naming him in the proceedings other than to embarrass him,”

While citing the roles of the President, Kamau submitted that the independence of the Executive arm of government which the President chairs is critical in ensuring the stability of the country.

“It is necessary that the President has decisional freedom to make decisions that are key and are important to safeguard the interest of the country. He occupies a unique position which he on a daily basis he has to make decisions which affect the lives of Kenyans,”

He cautioned that a President who doubts his/her decisions for fear of being sued risks steering the country in the wrong direction.

“If the President is detracted because of the fear that every decision he makes may attract civil liability against him it would have a chilling effect on the ability of the President to make decisions that are important for the purposes of the people of Kenya,”

Kamau however, clarified that the Office of the Attorney General is not advocating for absolute immunity to the President and asked the seven-judge bench to just uphold the Constitution.

“In relation to the Constitution and that in respect of private action any suit against the President can only be filed after he leaves office,”

High Court judges George Dulu, William Musyoka and James Wakiaga, in a decision rendered in May 2021, opined that the President is not entirely protected from being sued noting that law only shields him from criminal liability.