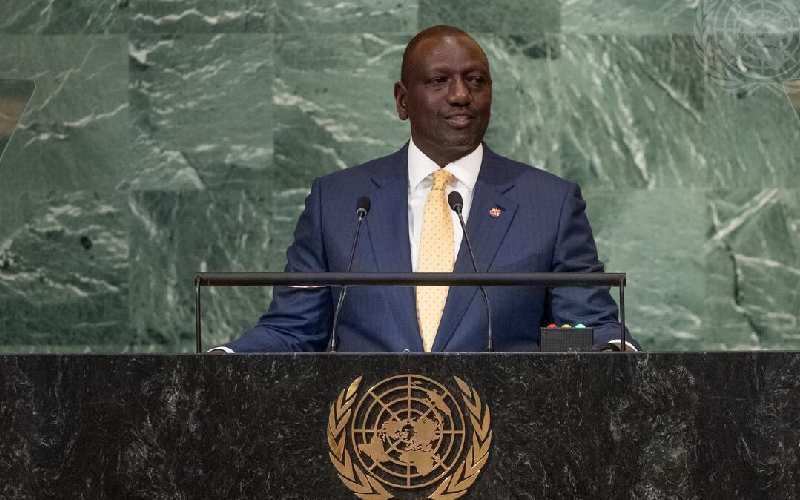 Ruto in his  speech at the 77 UN General Assembly in New York,  said that he fully supports the ‘Building back Better’ initiative which is the universal rallying call to incorporate lessons learnt from the COVID-19 pandemic in a better way to recover from its shock.

“Building back Better’ from the bottom upwards is essentially about including the marginalized working majority in the economic mainstream. The bottom billion relentlessly wage their daily battle for survival in a crowded arena characterized by scarcity of opportunity and generally precarious existence,” Ruto said.

In his campaign, Ruto centered on the bottom-up economic model to woo the ordinary Kenyans to vote for him. Through the ‘hustler’ messaging, Ruto said his administration would ensure that the ordinary citizens have a say especially when it comes to decision making.

According to him, invisible to policymakers and beyond the reach of many public services, the said hustlers take nothing for granted, surviving overwhelming odds and frequently succeeding greatly.

“It is time to bolster the resilience of our nations to mainstream these hustlers through deliberate strategies and efforts for economic inclusion by building back better from bottom-up,” he said

The head of state said severe drought disruption of supply chains due to the COVID-19 pandemic and the Russia-Ukraine conflict have left countries in the horn of Africa region food insecure.

“We have been constrained to repurpose our strategies to prioritize drought and famine relief, insulating education front disruption and improving social protection and health care system to secure the well being of our people”

Ruto said a time has come for all UN member states and all relevant stakeholders to demonstrate strong political will and showcase effective cooperation by supporting the most affected countries financially, through sharing land restoration and climate adaptation technologies.

“It is through collaborations to expand inclusion that we can attain a new paradigm in multilateralism he said.