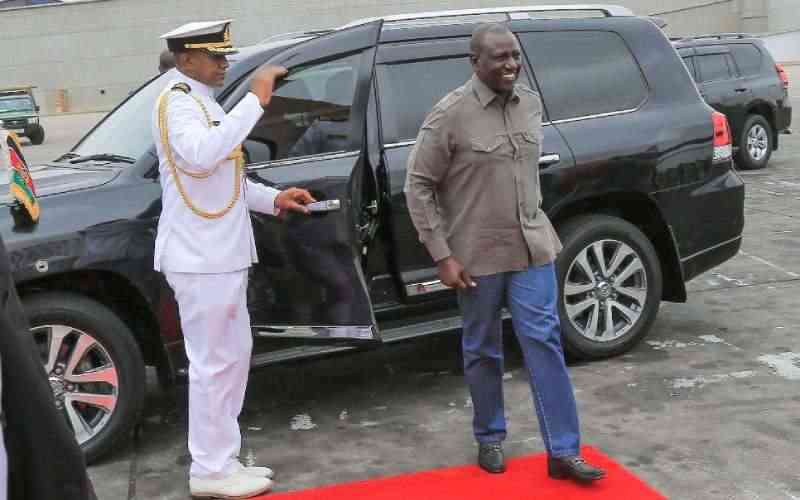 President William Ruto left the country on Sunday afternoon, for his first international trip since his inauguration on Tuesday, September 13, this year.

The president will make his first stop in London, United Kingdom to attend for the burial ceremony of the gone Elizabeth II and then go to the United States later.

Ruto is travelling alongside his wife Racheal Ruto. An article by the Washington Post has indicated that nearly 200 leaders of countries and territories across the globe will be flying into London for the burial.

This means that President Ruto and his wife might be taking commercial flights to London because of the tight schedule of landing slots all around the same time.

The Washington Post reports that almost every country or territory with diplomatic relations with Britain was invited. on the other hand, a number of countries including Russia, Belarus and Myanmar, have declined the invite over the Ukraine war and human rights abuses. Others, like Iran, North Korea and Nicaragua, were invited to send an ambassador, but not their head of state.

The invitation has composed of a reception at Buckingham Palace hosted by King Charles III on Sunday night and another reception immediately after the arrival, the leaders will then be directed to a place in west London, where they will park their private cars.

On burial day, the heads of state and their partners will arrive at Westminster Abbey in escorted coaches from a location in west London. After the burial, the heads of state will be taken back to their holding area, where they will be allowed to take their cars to the airport. President Ruto will then proceed to New York, for the 77th Session of the UN General Assembly in New York later this week. The assembly will run for a week from September 20 up to September 26, 2022.

The assembly is expected to have 193 member states, each with an equal vote. It provides a unique forum for multilateral communication and discussion  of the full spectrum of international issues covered by the UN Charter .

While the president is away, his Deputy Rigathi Gachagua is going to represent him in his absence through heading all and directing the country as required