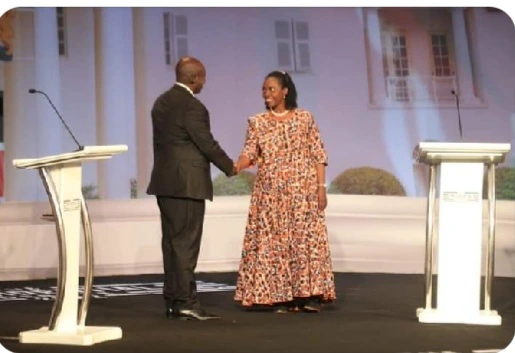 Martha Karua was out to explain why the voters should go for her captain Raila Odinga while rigathi Gachagua did not restrict himself on why William Ruto is to fit to occupy the top seat. On why they went for the running mate seat ,Karua mentioned that Azimio will rescue the country from corruption and cartels.

” I will devote 100% to the people of Kenya and help my boss stick to the rule of the law in a respectful manner,”

Gachagua stated that Kenya kwanza will devote itself in restoration of dignity of the people and put money in their pockets.

” I have the time and commitment to serve the people of Kenya and give back up to Ruto,”

They also gave different opinions on the ongoing war between President Uhuru Kenyatta and His deputy William Ruto. Karua criticized the ongoing war of words between the two leaders saying that it is a disgrace to the people who elected them. She says in case of differences between her and Raila, they will moderate it and prevent escalations.” Even the constitution acknowledges diversity of issues but this should not escalate to arguing and calling each other names in the public because what they need are the results,” said Karua.

Gachagua expressed confidence that things will not get to that point if they form the next government. He says that they will be too busy to imagine of disagreeing about anything.

” Ruto will never punish me for no reason… The president should not have a problem if his DP is strong, active and sharp. He should instead use the strength and actualize his ideas,”

The two admitted on the drastic rise in the price of commodities over the years. Karua attributed this to the high fuel prices and corruption. Gachagua blamed president.

Uhuru for this saying that he is now struggling to reduce the price of maize floor to convince people to vote for Azimio. He also said that president Uhuru has been slow on the fight against corruption because those involved are close to him.

“we will go after everybody involved in state capture and conflict of Antrest,”

Karua assured the people that crime cases will be prosecuted in six months just like election petitions.

” You don’t need a commission to punish crimes, you just need a serious enforcement of the law. If the election cases can take six months, why can’t corrupt cases take the same time?,”

The debate ended when the two appealed to the vote for their respective camps come august 9th.