RAILA CAN HAVE ANOTHER CHANCE 2027 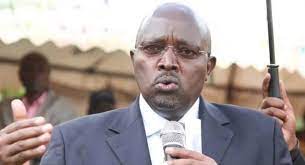 Odinga now 77, will be formidable in the next polls despite his age. This is according to former United  Democratic Alliance (UDA)  vice  chair   Kipruto Arap  Kirwa who noted that there is still hope for  Azimio la umoja One Kenya alliance leader Raila Odinga in the 2027 general election despite his loss in 20222 election polls. Kirwa said this during a panel discussion with journalist today in the morning.

”I would be hesitant to write an obituary of any politician. I know one man by the name Abdolaye wade who became the president of Senegal at the age of 77 after trying for 35years.Raila may be 81 in the next election and he can still make it as the president the republic of Kenya, this means that Raila is still formidable .To be elected you need not to be energetic but what you only need is the wishes of the people and the tune of the people.” Kirwa noted

“The way I see the next five years and I wish my brother  Dr. William Ruto well, is it that the debt burden by 2025 will be high, unemployment will be high ,the po9licy of bottom up hye has should improve in terms of financial discipline” said kirwa.

“The hope that the people of Kenya have in him especially the young population is so overwhelming that it can turn into a sporty of backlash and so Raila Odinga is still in this town and we never measure somebody’s life by t5hen extent of age.” Kirwa adds.

Kirwa  said that he doesn’t regret getting out of UDA in may for Azimio camp in may because his belief and ideologies didn’t match with the UDA party.

” in politics when you feel uncomfortable about the environment under which you are operating ,you are forced to bolt out of it. I did so not because of any disagreement with the current president but I realized that   I was in terms of individual s whose school I don’t  belong to” Kirwa said.