RAILA, RUTO IN TIGHT CONTEST AS TALLYING NEARS THE END 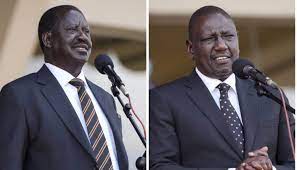 Tallying at the Bomas of Kenya is almost over and Kenyans may know the presidential results before the day ends.
As of this morning, Deputy President William Samoei Ruto had a slight lead with a total vote of 6,081,048 votes from a total tallied votes which were 11,896,290 representing 51.12% while the Azimio la Umoja candidate Raila Odinga followed closely with 5,734,314 votes representing 48.20%

Kenya Kwanza and Azimio la Umoja presidential candidates are necks to neck in the state house race.
As of today, at 6.40 am on Monday, August 15, the Independent Electoral and Boundaries Commission(IEBC) had tallied presidential results from 241 constituencies out of the 291 constituencies including the Diaspora which was counted as a constituency.
Agano party David Mwaure on sunday conceded the defeat. He said he reached the decision with his team after a long discussion and also after they analyze their performance on the ongoing tallying at the Bomas of Kenya. He projected that Ruto will emerge as the winner.

“We have been following the exercise at Bomas with my team. The figures there have consistently and undoubtfully been in favor of William Ruto the current Deputy President “
Security of high ranks has been deployed at the Bomas of Kenya to make sure the security is maintained while the verification of votes is still ongoing. A general service unit has also been deployed and no unauthorized person is allowed in the building.