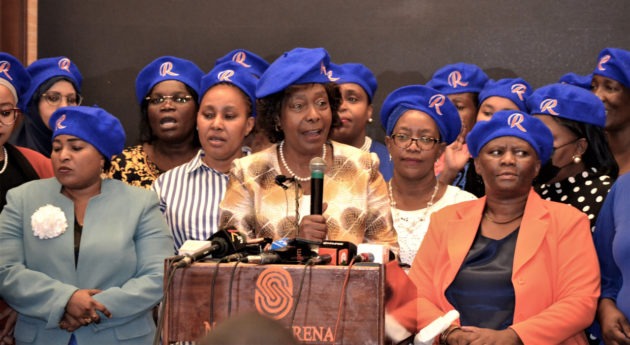 “We are pleased to announce that our MOVEMENT has found a partner in a man who has stood with Kenyan women, our patron, and presidential candidate Hon. Raila Amolo Odinga. We will be Baba’s army in the streets and village as we sell the Azimio la Umoja agenda,seek support for him and protect his votes,”

The women championing Odinga’s bid will also seek to defend the interests of women across the country saying it was the opportune time to awaken the leadership for women leaders.

“Jeshi la baba ni akina Mama will seek to have the voice of mothers in a village in Nyeri County who is struggling to raise her children as a single mother heard, and the place of a widow in Mandera burdened with the responsibility of feeding her children recognized,”

Likoni MP Mishi Mboko insisted that the women lobby group for Odinga will ensure that women get direct nominations in various political seats they are eyeing for in the spirit of the equality through the two third gender rule.

“In our political parties we are lobbying to ensure strong women are given an opportunity.We must ensure women who were top elective seats are catered for,”

Shebesh disputed claims by their political rival in Kenya Kwanza Alliance that Odinga is a state project saying its all propaganda and a ploy to paint Odinga’s candidature negatively.

“We are here to hit the ground running to ensure Raila Odinga is president. We can put our personal interest aside and push for Baba’s win. Raila cannot be a project and as Jubilee we have no apologies when supporting Odinga. Even if they say he’s a state project, we are not going back,”

Kananu who is seeking the Nairobi Gubenatorial seat in August polls challenged more women to seek elective posts to break cultural barriers that have denied them from clinching elective positions in the past.