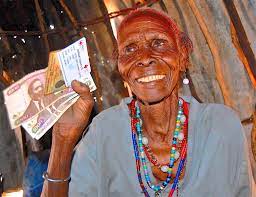 The Government of Kenya declared drought as a national disaster on September 8, 2021. With food security becoming a worrying trend especially in the arid and semi arid counties in Kenya, more than 2.1 million people are on the verge of starvation. These counties are twelve counties1 namely Marsabit, Mandera, Garissa, Wajir, Kilifi, Tana River, Makueni, Lamu, Samburu, Kitui, Isiolo and Laikipia are in the alert drought phase as of July 2021. Today however, More than 18,000 vulnerable households in Baringo County have benefited from Sh45million cash transfer project sponsored by Kenya Red Cross Society (KRCS) in collaboration with USAID to improve their livelihoods.

Speaking during the launch of the cash transfer at Nakoko sub location in Silale ward, KRCS Head of Disaster Risk Management, Elijah Muli, said the cash transfer will go a long way in supporting malnourished household members, orphans, people living with disabilities, those with chronic illnesses and women-headed families in inaccessible areas of the county.

RedCross Cash transfer system is  a mechanism for providing cash as a resource to beneficiaries in humanitarian response to address basic needs and/or to protect, strengthen or restore livelihoods. Cash transfers are used in pre-crisis, acute crisis, chronic crisis and post-crisis situations and can be applied across all sectors ranging from Emergency Relief, Health, Livelihood or Social Support. However according to Redcross, the mechanism does not necessarily replace but can also accompany other forms of assistance.

According to the KRCS Head of Disaster Risk Management, Elijah Muli 1200 households from Tiaty East and West will benefit from Sh5, 067 per month through M-pesa for the entire period which is the highest share in the region. 1000 households in Baringo South and North will also benefit  while Baringo Central and Koibatek Sub Counties will each have 218 households supported.

Muli said that the project came in at a critical time targetting households in counties hardest hit by the current drought, persons who are not receiving any financial support, as well as families living in inaccessible areas. Governor Stanley Kiptis, while launching the cash transfer programme, expressed his appreciation to the two organizations saying that the short-term intervention will alleviate the worsening food crisis being experienced by the affected communities.