RUTO SHOULD GIVE AN APOLOGY TO MIGUNA MIGUNA-MARTHA KARUA 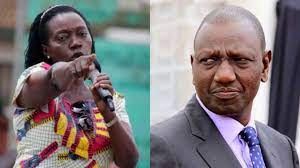 Narc-Kenya party leader Martha Karua now opines that President William Ruto should be the first in line to apologize to lawyer Miguna Miguna over his deportation in 2018. Karua says that the Head of State is part and parcel of the woes that befell the lawyer about five years ago, and should not be deemed to have vindicated his actions after facilitating his return on Thursday. According to Karua, Miguna was deported by the Jubilee regime in which Ruto served as deputy president, hence should carry the burden of apology for his then boss and now predecessor Uhuru Kenyatta.
“It is an action that he cannot dissociate himself with. In fact, today, I would expect that he would have apologised to Miguna on his behalf and on behalf of the President who has just retired. It is their government that committed that atrocity.”Karua went on to describe Miguna’s deportation as unlawful saying that if the Raila Odinga-led Azimio la Umoja One Kenya coalition party would have clinched the presidency at the August polls, then they would also have allowed the outspoken lawyer to return to Kenya. “Our campaign was under the platform of the rule of law, constitutionalism and as many may recall, Raila Odinga had indicated that I would handle the docket on matters of the constitution and the rule of law. Miguna would have been able to enjoy his rights and have his passport returned,” Karua stated.
Miguna arrived at the Jomo Kenyatta International Airport (JKIA) on Thursday morning after almost half a decade in exile.Speaking after his arrival, Miguna acknowledged President Ruto’s government for honouring the promise to ensure he comes back home.“I am thanking the president, his deputy and their administration and everybody else who has worked tirelessly to make sure that my rights and the rights of every other Kenyan are protected. What has happened to me should never happen to anyone else,” he said.
Miguna thereafter attended Mashujaa Day celebrations at Uhuru Gardens before proceeding to State House for a lunch on under the invite of the Commander-in-Chief.