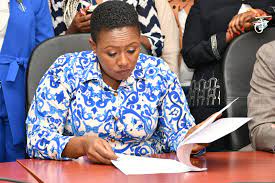 Murang’a Women Representative Sabina Chege has failed to appear before the Independent Electoral and Boundaries Commission over vote rigging claims she had made. According to her Lawyer Otiende Amollo, Sabina fell ill and is currently receiving treatment at the Nairobi Hospital.

Amollo stated that as a result of this, the politician was indisposed, and the doctor has not yet indicated when she will be discharged.

The electoral body had summoned the Murang’a Woman Representative on charges of breaching the electoral code for claiming that the 2017 vote was rigged and “even this one (2017) we can.”