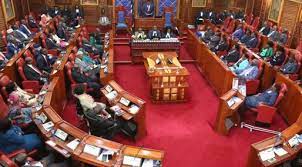 Senate will from Tuesday hold a three-day special sitting to debate among others the Political Parties Amendment Bill 2021. This is after Speaker Kenneth Lusaka gazetted the sittings which are expected to be heated as the Justice Legal Affairs and Human Rights Committee tables its report after concluding public participation on the Bill.

The Committee chaired by Okongo Omogeni on January 20 and 21 held a public engagement forum where it received views from the Independent Electoral and Boundaries Commission (IEBC), Registrar of Political Parties, Central Organization of Trade Unions, National Youth Council among others. The Committee is expected to propose at least seven amendments to the Bill when the House commences its second reading.

“I cannot single out specific clauses but we have received views virtually from the entire bill so there is no single clause I can point out. I know that will be evident once we submit the report before the House,”

The Independent Electoral and Boundaries Commission (IEBC), for instance, raised an issue with proposed timelines for formation of coalitions citing a conflict with the Election Act of 2011. The poll agency also raised an issue with the definition of a “coalition political party” saying the proposal creates ambiguity on what then constitutes a coalition of political parties under the existing framework. The commission argued that the Election Act under Section 31 provides for nomination of candidates of political parties which leave a gap in the case of a coalition party.

The Senate is required to pass the Bill without any amendment to avoid any delays for its implementation as envisioned by its proponents. Any amendment of the Bill by the Senate will result in the formation of a mediation committee comprising of the members from the Bicameral House which in turn would pose another dilemma for President Kenyatta and Odinga who are keen to have the Bill passed to clear the way for a coalition political party.