SH.100 MILLION PAAI BRIDGE CONSTRUCTED RECENTLY IN KAJIADO HAS BEEN SWEPT AWAY BY WATER 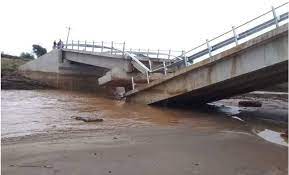 A newly built bridge in Paai, Kajiado East, has collapsed after heavy rains pounded the area over the past few days, leaving residents stranded on either side. The pillars gave in to the pressure from flash floods Wednesday night, breaking in the middle. The remaining support structures are shaky and may collapse too.

“The bridge tumbled down in the middle of the night. Those individuals who were waiting for the rains to subside to go home found the bridge collapsed,”

The Sh100m Bridge was launched last week by Kajiado Governor Joseph Ole Lenku in a colourful ceremony. Governor Lenku said at the time that the structure would help locals’ access medical facilities, markets and schools with ease.

The Paai bridge called an “inter-sub-counties connector”, links other parts of the county to Kinyawa Poka ward in Kajiado East that over the years had been isolated.

The main road connects the three wards of Matapato North, Mbirikani/Eselenkei and Kinyawa Pokato to Mashuru town, the nearest centre in the west with medical facilities, livestock market and other government services. Before the bridge was built, scores of people, vehicles and animals had been washed away trying to cross the swollen river.