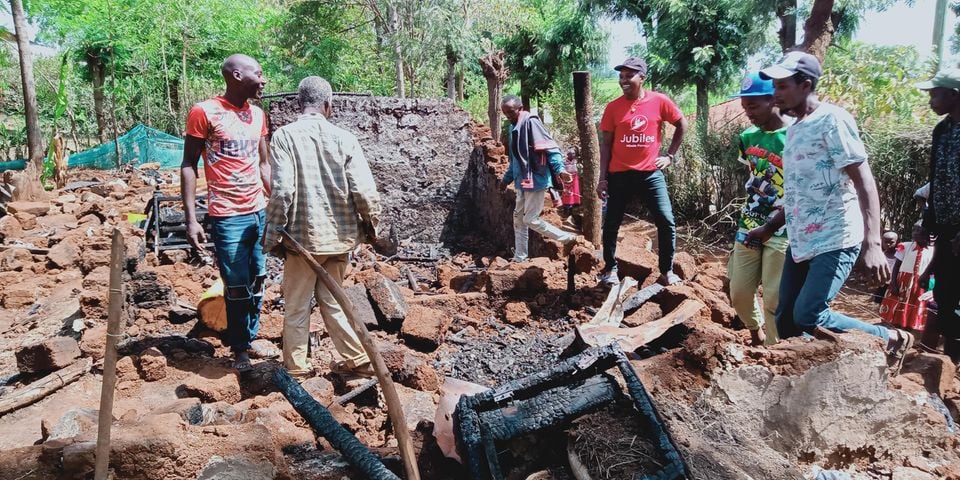 Residents of Murubara village in Kirinyaga County are horrified after hearing allegations that a rice hay seller killed and burned his wife following a family gathering. A 28-year-old Purity Wanjiku was burned beyond recognition in the incident on Monday night.

Villagers claimed that the businessman had organized a family gathering and invited friends. For hours, the guests enjoyed themselves. Shortly after they left, the man and his wife got into an unnamed argument.

He fetched a knife and killed Mrs. Wanjiku in the house where the couple lived with their three children, who were between the ages of two and six. He then set the house on fire to try and get rid of any evidence.

As the house caught fire, the trader hastily left with his children, telling his neighbors that his wife was burning inside and that a gas cylinder had exploded. The neighbors’ warning drew a large number of locals to the area, but their hopeless attempts to put out the swiftly spreading fire. Among the numerous household objects that were destroyed were beds and mattresses.

Detectives frisked the trader after his arrest, and while doing so they found a bloodied knife in one of his pants pockets. He was taken into custody to undergo questioning and taken to the Wang’uru police station. The man’s motivation has not been established, according to Daniel Kitavi, the police chief for Mwea East Sub-County. Kitavi also advised parents to talk things out or seek counseling in order to resolve their conflict.

Mr. Kitavi said, “We are treating this as a murder, and the suspect will be brought up in court shortly.” The bodies were examined postmortem in the mortuary of the Kerugoya Referral Hospital.

The woman’s father, Peter Mburu, claimed to have been home in Kiamanyeki village when he learned the tragic news. After hearing about what had happened, he rushed to the scene, where he was horrified to see the body of his daughter that had been horrifically burned. Currently asking for justice is Mr. Mburu. “I want to see the assailant put on trial in a court of law and sent in jail.”

Peter Kinyanjui, a different family member, said that Wambui was cruelly murdered by the guy she had shared a home with as husband and wife. “When we first saw her bones, we didn’t believe our daughter was dead,” noted Kinyuanjui.