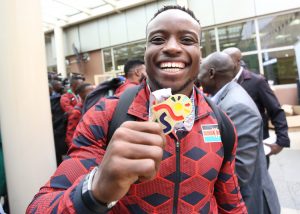 Ferdinand Omanyala is the new 100-meter champion at the
Commonwealth Games in Birmingham, England.
Omanyala made a splash on Wednesday night, thrilling the
crowd that flocked to the field, and won the gold in 10. 02
seconds, becoming the first Kenyan to do so in the history of
the commonwealth since its founding 60 years ago.
In Cali, Colombia, early today, Reynold Kipkorir Cheruiyot
became the new world champion in the young championship
under the age of 20 for the 1,500-meter event.

In the final 20 meters, Kipkorir leaped and separated himself
from his teammates to win the gold in 3 minutes, 35
seconds, and 85 points. Ermias Girma of Ethiopia came in
second place with 3 minutes, 37 seconds, and 24 points, and
Daniel Kimaiyo took home the bronze in 3 minutes, 3
seconds, and 43 points.
Meanwhile in the 10,000-meter women’s marathon final of
the Commonwealth Games in Birmingham, England, on
Wednesday night, Irene Cheptai and Sheilla Chepkurui took
home silver and bronze medals, respectively
After being passed by Ellish McColgan of Scotland in the
final 50 meters to claim the gold medal in 30 minutes 48
seconds and 60 points, Cheptai came in second with 30
minutes 49 seconds and 52 points.

Despite having leg pain in the final 200 meters, Chepkurui
managed to win the bronze medal in 31 minutes and 9
seconds with 46 points. The 2018 winner Stellah Chesang of
Uganda finished in fourth position.

Kenya’s Ferdinand Omanyala celebrates winning and taking
the gold medal during the men’s 100m final athletics event
at the Alexander Stadium, in Birmingham on day six of the
Commonwealth Games in Birmingham, central England.
In international news, Sergio Aguero has questioned his former
club over the decision to sell Raheem Sterling this summer.
Manchester City allowed Sterling to leave after entering the final 12 months of his contract when Premier League rivals Chelsea came in with a £47.5m bid. Sterling followed Gabriel Jesus out of the Etihad exit door in a summer that has seen the Blues set a new record for most money raised in a transfer window but at the cost of experience and dynamic forward play.

Pep Guardiola does have new signings Erling Haaland and Julian
Alvarez in his squad this season, two exciting additions that have high expectations but may also need time to acclimatize to the football played both at City and in England.