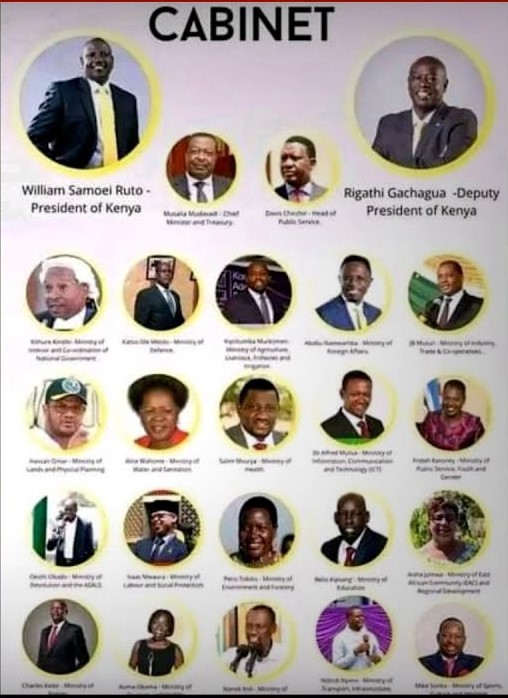 President William Ruto on Tuesday finally unveiled the names of the men and women he has nominated to sit in his Cabinet and assist him in coordinating the activities of government departments as he embarks on implementing pledges in his campaign manifesto.
The nominations have notably favored many of President Ruto’s close political associates and even more so former statesmen who opted to not contest for any legislative seats at the August polls in order to focus their efforts in campaigning for the now Head-of-State nationally.
Here is a compilation of the 12 biggest winners of the president’s cabinet
Musalia Mudavadi
Amani National Congress (ANC) party leader Musalia Mudavadi has been named Prime Cabinet Secretary (CS) by President Ruto, a position which will technically see him only report to the Head-of-State and his Deputy Rigathi Gachagua. In the months leading up to the elections, members of Raila Odinga’s Azimio la Umoja coalition occasionally courted Mudavadi, who held no elective seat, in an attempt to persuade him to ditch Ruto’s team and join the former premiere’s camp. Having fallen out with Raila some time back, Mudavadi held firm and supported Ruto and his loyalty has since been clearly rewarded.
Simon Chelugui
Chelugui is the only surviving member of ex-President Uhuru Kenyatta’s cabinet who will continue serving in Ruto’s. The outgoing Labor and Social Protection CS has been nominated for the Cooperatives and SMEs Development CS position.

Alfred Mutua
After serving as Machakos Governor for two terms, Mutua decided not to contest for any elective seat in the Senate or the National Assembly in the last elections instead opting to drum up support for Ruto’s presidential bid over that of Raila which he had briefly supported. His efforts have seen him nominated for the position of Foreign and Diaspora Affairs CS.
Kithure Kindiki
Former Meru Senator Kithiri Kindiki in February opted to shelve his gubernatorial ambitions to focus on President Ruto’s national campaign efforts. Having also been “overlooked” for the running mate position in favour of DP Gachagua in May, many assumed that the lawyer by profession would soon after bolt and join the Azimio camp but he held firm and his leap of faith is set to be rewarded with the position of Interior CS should the National Assembly okay his nomination.
Mithika Linturi
Having been one of the biggest names in Meru County’s governor race in August, many were surprised when the then Meru Senator lost alongside then Governor Kiraitu Murungi to woman representative Kawira Mwangaza. In early September, a section of Meru leaders urged President Ruto to reward Linturi with a national position citing that the ex-senator had fallen short at the polls since he allegedly focused on drumming up support for Ruto’s bid instead of his own. Their pleas seem to have been considered since Linturi has been nominated to serve as Agriculture and Livestock Development CS taking over from Peter Munya.
Moses Kuria
Former Gatundu South MP Moses Kuria had his eyes set on Kiambu County’s gubernatorial position during the polls but he alongside three other candidates were floored by ex-Kiambu Senator Wamatangi who is now the county’s top honcho. Kuria came up last in the race after garnering only 24,512 votes. In comparison, Wamatangi managed 348,371 votes. Had Ruto not emerged victorious in the presidential race, chances are that Kuria would have taken a break from politics to pursue his personal interests, something that he hinted on social media, but he has since been nominated for the position of Trade, Investment and Industry CS.
Aisha Jumwa
Having lost out to ODM’s Gideon Mung’aro in Kilifi County’s gubernatorial  race, after garnering 65,893 votes compared to the eventual winner’s 143,773, former Malindi MP Aisha Jumwa will sit on President Ruto’s cabinet as Public Service, Gender and Affirmative Action CS.
Penina Malonza
At the August polls, UDA candidate Malonza attempted to usurp Irene Kasulu as Kitui County’s Woman Representative but the latter managed to retain her seat after getting 201,899 votes compared to Penina’s 78,733 votes. She has been nominated for the Tourism, Wildlife and Heritage CS docket.
Soipan Tuya
Having served as Narok County’s woman representative since 2013, Tuya distanced herself from assertions that she would defend her elective seat at the polls even after being encouraged to vie for the position for a third consecutive time by area residents. The pro-Ruto former legislator has been nominated for the Environment and Forestry CS position.
Ababu Namwamba
In February, the then Foreign Affairs CAS Namwamba refuted assertions that he would be vying for an elective position at the August polls when he officially resigned and joined Ruto’s Kenya Kwanza. Namwamba revealed that his move to back Ruto’s presidential bid was fueled by the ideologies which constituted the former Deputy President’s agenda for the nation. A few days later, Namwamba was appointed the Head of International Relations for Ruto’s presidential campaign.
Salim Mvurya
Former Kwale governor Salim Mvurya has been nominated for the position of Mining CS in President Ruto’s administration. He was among leaders anticipated to clinch Cabinet jobs if President William Ruto won the August presidential polls.
Justin Muturi
The former National Assembly Speaker Muturi has been nominated as the Attorney General in president Ruto’s administration. Muturi was sponsored by the Jubilee party as house speaker for two terms since 2013 but closed ranks with the Kenya Kwanza Alliance in April of 2022 shelving his presidential ambition. Muturi led his Democratic Party (DP) into the President Ruto-led outfit and is now set to reap big from his calculated move.