THE FORMER PRESIDENT OF KENYA NOW IN NIGERIA 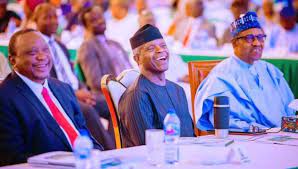 The former Head of State who was invited by Buhari gave a keynote address on how cooperation is integral for optimal performance in a government, and shared on his peaceful hand-over of power to his successor William Ruto. In the retreat Titled ‘Enhance Security, Fight Corruption, Transform The Economy’, Uhuru also praised the team behind the successful development projects that were delivered during his tenure.
Uhuru was accompanied by Dr. Fred Matiang’i, who was the former Education and later Interior Cabinet Secretary under his administration, as well as Nzoika Waita, the former State House Chief of Staff.
The retreat is with an aim of  reviewing  the performance of Nigeria’s regime in the past year as the country prepares to elect another president in February come  next year.