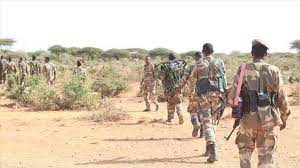 Two suspected Al-Shabaab militants were Sunday killed in an ongoing operation in Boni Forest, Lamu County. The two were killed in the Sarira area within the expansive forest and guns found on them.

Kenya army troops that clashed with the two said they were in a group of four and that two others escaped. Lamu County Commissioner Irungu Macharia said the hunt for the others who escaped is ongoing. The area has been under operation for years as Kenya seeks to remove the terrorists and their remnants from the region.  Two weeks ago, two other suspects were killed in the Baure area.

The terrorists have been attacking Kenyan troops, killing and injuring others in a series. They have also been targeting what is believed to be non-locals in the trend. The gang killed five workers at a construction site in Bodhei area on March 11 and burnt down two Lorries involved in the construction of the Lapset project in the area.

The government has blamed ethnic profiling that is linked to political inclinations around elections, the looming voter registration drive and land disputes as to the primary causes of the latest attacks.

Officials said the terrorists are exploiting the low-cost strategy and deploying it near forwarding operating bases or main supply routes to attack their targets, Since the area is near the Kenya-Somalia border, which has been under attack by terrorists in the past.

This is happening both locally, especially in the northern part of the country, and in Somalia.

KDF troops are among those under African Union Mission in Somalia (AMISOM) that are operating in Somalia. They aim to suppress al-Shabaab activities in the region.