WHO IS PRESIDENT ELECT? 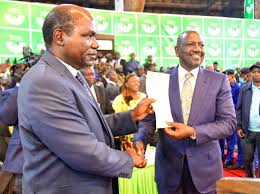 Have you ever wondered what it takes in order to get president elect?  Immediately after the Independent Electoral and Boundaries Commission chairman Wafula Chebukati declared the deputy President William Ruto as the president elect, some celebrated, others cried and there are those who didn’t really care. But what exactly  happened before he was declared president elect and what will follow after that?

According to chapter 9 article 138 of the Kenyan constitution, if only one candidate for presidential position is nominated, then the IEBC automatically declares the candidate a elected. If two or more candidates are nominated for the seat of presidency, an election shall be held in each constituency whereby all persons above 18 years who are registered as voters are entitled to vote and the pull shall be taken by secret ballot on the day specified in article 101 (1) at the time in the places and manner prescribed under an act of parliament and after counting the votes in the polling stations the IEBC shall tally and verify the count and declare the results.

A candidate shall be declared elected president by the IEBC chairman if he or she has attained at least half of all the votes cast in the general election and at least 25% of votes cast in each of more than half the counties. If no candidate is elected, a fresh election shall be held within 30 days after the previous election and in that fresh re-election, only two best candidates will vie and  the winner will be declared elected president.

A presidential election can also be cancelled and a new one held if no person has been nominated as a candidate before the expiry of the period set for delivery of nominations, a president elect or his deputy dies on or before the scheduled election date or a candidate who would have been declared as elected president dies before being declared president.

Seven days after presidential elections, the chairperson of IEBC shall declare the results of the election and deliver a written notification of the result to chief justice and incumbent president.  The swearing in of the president elect shall be in public before the chief justice or in the absence deputy chief justice and president elect shall be sworn in on the first Tuesday following a 14 days after the date of the declaration of the result of the presidential election, if no petition has been filed under article 140 or day 7 after the day which court renders a decision declaring the election to be valid, if any petition has been filed under article 140.

The president elect then assumes office by taking and subscribing the oath of affirmation for the execution of functions of office, as prescribed in the 3rd schedule and parliament shall by legislation provide a procedure and ceremony of swearing in the president elect.