WILL THERE BE CHANGES AFTER THE INAUGURATION? 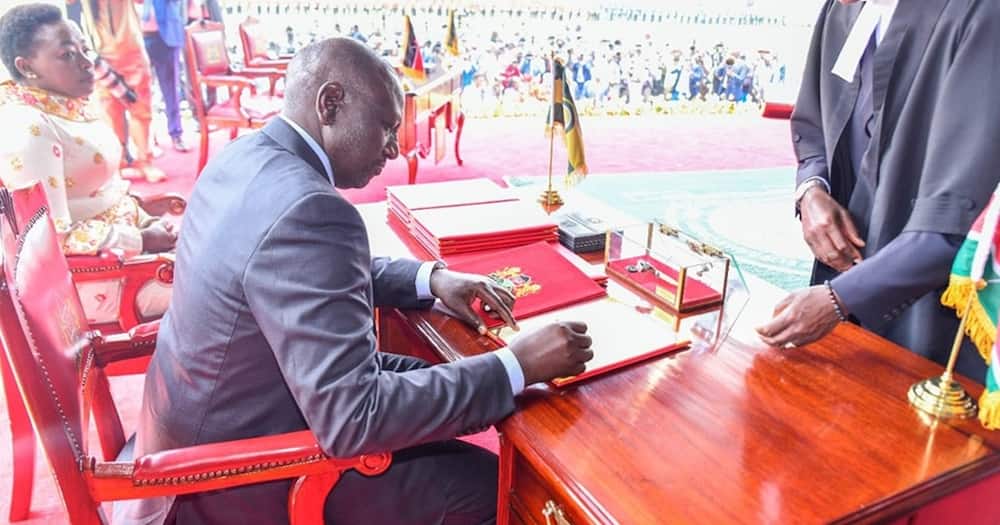 President-elect William Ruto officially became the fifth President of the Republic of Kenya during the swearing in ceremony on Tuesday 13/09/2022.

William Ruto and Rigathi were elected as the country&#39;s president and vice president during the 9th  august election. The event began with the guests, including the presidents of different
countries, arriving, some of whom include Samia Sulhu of Tanzania, Felix Tshisekedi of Congo, Everest Ndayashimiye, Paul Kagame, prime minister Abiy Ahmed of Ethiopia, and the prime
minister of Swaziland.

Following the inspection of the parade of honor, which was the last parade for outgoing president Uhuru Muigai Kenyatta to inspect, it was the turn of the president- elect William Samoe Ruto to take the oath of office .

After taking the oath of leadership, outgoing president Kenyatta presented William Ruto with the tools of leadership and authority including the army commander’s sword as well as a copy of the Kenya constitution. The flag of president Ruto was also raised while that of outgoing president Kenyatta was lowered indicating the change of power.
President William Ruto began his official speech by praising the independent electoral and boundaries commission (IEBC) under its chairman Wafula Chebukati for its bravery during a
time of sacrifice and absurdity.
Ruto said his government will collaborate with IEBC to ensure that the commission uses modern technology. President William Ruto has announced that he will appoint six Court of Appeal judges who were rejected by his predecessor. He said he will appoint the six judges on Tuesday afternoon and later preside over their swearing-in ceremony on Wednesday.

The Six judges were left out when outgoing president Uhuru mwigai Kenyatta appointed 34 others. They are High Court judges Aggrey Muchelule, George Odunga, Weldon Korir and Joel Ngugi. The four had been recommended by Judicial Service Commission to join the Appellate court.

President Kenyatta also left out Chief Magistrate Evans Makori and High Court registrar Judith Omange, who were recommended to be judges of the labor court. In November last year, the Court of Appeal temporarily suspended an order directing Uhuru to swear in six judges within two weeks. Justices Roselyn Nambuye, Wanjiru Karanja and Imaana Laibuta granted the orders after Uhuru rushed to the Appellate court arguing that there is eminent danger of embarrassment and uncertainty in the dispensation of justice if the directive remained unchallenged.
Ruto also took that chance to elect retiring President Uhuru Kenyatta as a member of a peaceful, constitutional African nation.

Ruto said that Uhuru had consented to carry out the missions after his retirement at his first speech as president of state at Kasarani. He remarked that the previous leader had done well to ensure regional peace. He also expressed gratitude to Uhuru for consenting to represent the nation.
The President concluded by assuring the citizens of Kenya that he is prepared to work, fulfill his duties, and keep the promises he made during the campaign period.