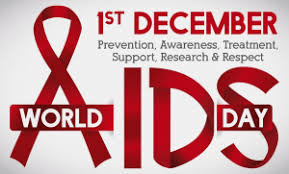 As the world celebrates World Aids Day, Kenyatta University and OraQuick HIV Self- Test have partnered to host an HIV Self-Test awareness camp. The awareness camp is part of the University’s initiatives to drive the HIV prevention agenda with 42% of new adult infections being among the youth.

National AIDS and STIs Control Programme’s (NASCOP) Jonah Onentia noted that the self-help kit has the potential to improve uptake of HIV testing by individuals who fear breaches of confidentiality.

“42% of new HIV infections in Kenya are youth and adolescents, some are afraid to go to health facilities or VCT centers to know their status and that is why we are pushing for HIV self-testing. We cannot preach the gospel of knowing one’s status enough because the more people know their status the more we reduce the spread of HIV and Aids. Young people please know your status”.

Over 1,000 students were trained on how to use the OraQuick HIV Self- Test Kit which is available at local pharmacies for Sh250.OraQuick HIV Self-Test is the only HIV self-testing kit that is readily available in the Kenyan market.

The kit that is an oral fluid test detects antibodies for both HIV-1 and HIV-2, enabling individuals to find out their HIV status with a simple oral swab in as little as 20 minutes.

“The simplicity of the self-testing kit makes it ideal for testing in a range of locations, including in the privacy of one’s home, at the pharmacy, or at community-based testing events like the one hosted at Kenyatta University,”

“The HIV prevalence among the youth has increased and as educators we must be at the fore-front of the fight against HIV and Aids. That fight starts with knowing one’s status and we encourage all our students at Kenyatta University to know their status,”

According to the National AIDS Control Council (NACC), Kenya recorded 41,416 HIV infections in 2020.NACC noted the high rate of teen pregnancies remains a stumbling block in the quest to eliminate new HIV infections in the country. The theme of World AIDS Day 2021 is “End inequalities end AIDS” with a special focus on reaching people left behind and highlighting the growing inequalities in access to essential HIV services.