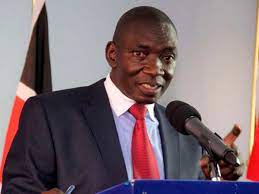 Government spokesman, Colonel (Rtd) Cyrus Oguna, has urged young people to educate themselves so they may take advantage of government support and, in turn, lower the unemployment and poverty rates in the nation.

According to Oguna, The finest present you can offer someone is education. Oguna encouraged young people to learn more about the many government initiatives targeted at supporting enterprises run by young people.

The government spokesperson stated that the youth needed to be mentally empowered to believe they could achieve self-reliance while speaking in Siaya at a Youth Empowerment Forum to inform the young people about the opportunities for funding by the government through programs like Ajira Digital, Uwezo Fund, AGPO, and others.

Oguna said Siaya County has produced a lot of intellectuals, but is ranked among the last in the poverty index, something only the youths can change.

“We are so educated and learned but we are lingering at the bottom,”

The government spokesman pointed out that 30 percent of every Ministry’s procurement budget every financial year is dedicated to the young men and women of this nation, but very few are aware and even fewer have sought out such opportunities, citing that what they lacked was aggressiveness.

“Right now there are over 1.2 million Kenyans earning from online jobs, you can be one of those people, but you must get up and get out…These programs will not come to you at home, you must go to the respective offices and be told about them, don’t be shy, don’t be afraid,”

Commenting on the forthcoming general election, Oguna reminded the youth in attendance that it is the ordinary citizen who suffers most when chaos erupts and so as the most critical stakeholders of the polls, it was up to them to ensure peace is maintained before, during and after elections.

Oguna noted that because of their high rates of unemployment and poverty, young people continue to be the most susceptible to political abuse, such as offering them handouts to sway their voting decisions.

He urged the youth of Siaya and the nation at large to exercise caution, recognize that handouts cannot support them, and consider their destiny as young people before casting their votes. The forum was attended by close to a hundred participants.