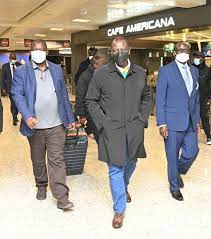 Deputy President William Ruto is in Washington where he is expected to hold a series of meetings and also meet Kenyans living in the Diaspora. This is part of a ten-day tour of the United Stated and the United Kingdom where he will discuss foreign policy, democracy, governance, and expound his economic vision for Kenya and Africa with government officials from both countries.

In Washington, the Deputy President is scheduled to meet, among others, officials of the State Department and the Pentagon as well as the US Government National Security Council Advisor. According to his Presidential Campaign Head of International Relations Ababu Namwamba, Ruto is honoring invites by the officials and top policy institutes in Washington, DC and London.

“He will also speak at the Carnegie Endowment for International Peace, the Center for Strategic and International Studies, and at the University of Arizona’s Washington Entrepreneurship Hub,”

Namwamba further stated that in London, Ruto will meet senior UK Government officials, visit the National Counter-Terrorism Center and speak at both the Commonwealth Secretariat and the Royal Institute of International Affairs.

“He will also engage the Kenyan Diaspora in the UK and pay a courtesy call on the Archbishop of Canterbury, His Grace Justin Welby,”

Namwamba indicated that Kenya remains a stable regional anchor state and a valued member of the global community, and the Deputy President’s trip seeks to further strengthen ties with the country’s traditional friends and partners.