HOPE IN THE FIGHT AGAINST POLIO IN KENYA 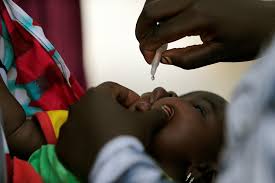 Following the introduction of new polio vaccine there is hope in the fight against polio in Kenya. This comes at a time when the country has detected new variant due to mutation of the virus and cases in Kamukunji, Nairobi and Daadab Refugees camp, in Garissa County two weeks ago.

Kenya was certified poliovirus free in 2005, but suffered a setback in 2018 after live viruses were found in samples collected from Nairobi’s Eastleigh estate and since then, other cases have been reported in northern Kenya.

Polio affects children below five years and is transmitted from person-to-person mainly through the faecal-oral route. It causes paralysis, life-long disability and even death. The new vaccines, however, provides new hope and Director of Public Health, Dr Francis Kuria, said Kenya has certified all conditions for the novel oral polio vaccine (nOPV2) to manage outbreaks and build immunity against the more prevalent polio type 2 (cDPV2).

The vaccine was pre-qualified by World Health Organization’s (WHO) Prequalification program which issued an Emergency Use Listing recommendation following clinical trials showing it to be safe and providing protection against polio comparable to the currently used type 2 monovalent OPV (mOPV2). The nOPV2 is a modified version of mOPV2 and has been in development for about a decade.

Only two countries in Africa, Nigeria and Liberia are using the new vaccine, but Kenya will shortly follow Ivory Coast, Mali, Mauritania, Togo and Cameroon in rolling it out.

UNICEF noted that over three million children in 13 counties in Kenya were to be vaccinated against polio with targeted counties including Garissa, Isiolo, Kajiado, Kiambu, Kilifi, Kitui, Lamu and Machakos. Others were Mandera, Mombasa, Nairobi, Tana River, Wajir and the Dadaab refugee camp.However,Covid-19 pandemic interrupted routine immunization and the country thus remains at risk of polio due to low immunization, porous borders with high-risk countries and high population movements.

While launching the campaigns in Garissa in May, UNICEF Representative in Kenya Maniza Zaman termed “polio a devastating childhood disease and as long as one child has polio, no child is safe. To eradicate polio, all children in all households must be immunized.” About five months later the campaigns have been successful, with at least 95 percent coverage and any further outbreaks of any childhood.

The decision by ARCC come in after an exhaustive, decades-long process of documentation and analysis of polio surveillance, immunization and laboratory capacity of the region’s 47 member states, which included conducting field verification visits to each country.